Bears in the city

This year, we've had many many more bear sightings through the summer and fall than I can remember;  it's largely a consequence of an acorn crop failure at higher elevations, but it's not unusual to see bears in Asheville now, especially in and near the surrounding ridges close to town, commented the author of a recent young adult book called Backyard Bears, who spoke at Malaprops yesterday.

She grew up here and never saw them in the city growing up.  A key reason was their population numbers had dropped really low in the 1970's, to approximately 1500-2000 bears in NC then, but numbers are now in the 19,000-20,000 range, much of the increase occurring in the last decade or so, if I'm remembering the figures correctly.

As you can imagine, this is getting a lot of attention on neighborhood list-servs in different parts of town.   I'm planning to write a longer piece on Natural Gardening about an excellent outreach program that's promoted by the NC Wildlife Resources Commission, Bearwise.org, a collaborative effort of state wildlife departments throughout the Eastern black bears' range,  but will just mention it briefly now.   It's definitely a good site to learn about best practices around bears.

Largely, it's young males we normally see in spring, but with food availability scarce at high elevations, it's Mama and her cubs this year.


This family was regularly seen throughout the summer in our neighborhood (and street)!  Two of our HomeExchange folks saw them.  We haven't had the opportunity, alas.

It is time to encourage people about proper bear-proof garbage containers, bird feeders, etc. -- to minimize the potential issues around bears in the city  -- they make quick work of unsecured calorie-rich foods.

Our first bear sighting was described in this 2009 post.  He had found the black-oil sunflower feeder below the house. 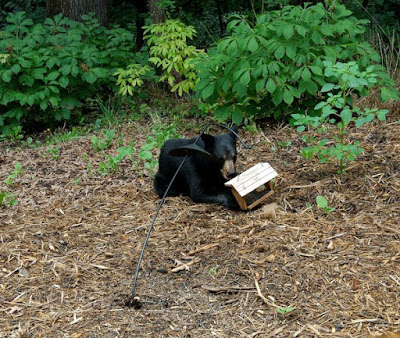 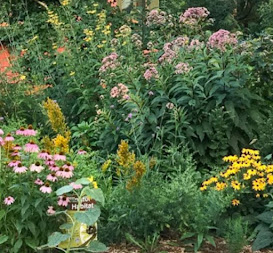 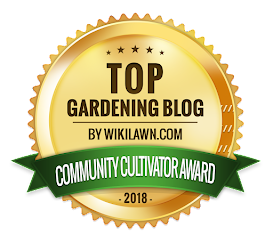